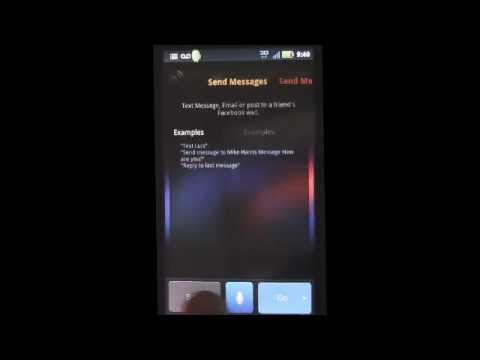 There are a number of apps for Android that all advertise that they can be your personal assistant. None of them are perfect, and all of them have their quirks, issues, and especially their limitations. Even so, we think that Vlingo is your best bet for a well-rounded personal assistant for Android.

Update: Check out our new pick for the best virtual assistant for Android.

We covered a lot of this territory when we discussed how to geta Siri-like personal assistant on your Android device, and while there have been a number of new entries to the field, we still think that Vlingo is one of the most mature and feature-rich, and is backed by a serious developer who isn’t out to cash in on the Siri-esque hype, like a number of other apps in this category. Vlingo’s pros and cons are clear to anyone who’s used it — the app has a wide variety of accepted commands and phrases, and can do a great deal without taking the time to understand your speech patterns or accent. If you need driving directions, want to call a friend, or want to update Twitter without touching your keyboard, you can do all of those things easily.

Vlingo’s hands-free mode, while not exclusive, is where the app really shines. Turn it on, put the phone down, and you can speak to your phone much like people call out to the ever-present computer in Star Trek — your phone will make a sound to let you know it’s listening, and then after you issue a command, it’ll chime to let you know it’s acting on it. If it can respond by voice, it will, but more often it’ll look up whatever you want, start to update your social stream, or search for movie times, and then ask you to confirm or continue the process by picking up your phone. Best of all, Vlingo is completely free — no “pro” version, no “unlock key.” Just free.

Even though we think it’s the best of the bunch, Vlingo isn’t perfect, and other apps have targeted its weaknesses to try and win an edge. For starters, if you start saying things that Vlingo doesn’t understand, it will just shunt you to a web search. That’s fine and most Android virtual assistants do this sometimes, but Vlingo does it for things like “What’s the weather in New York City?” when you’re not in New York City — kind of a bummer when just fetching the temperature and reading it back to me is something many other apps can do.

As we’ve mentioned, Vlingo’s biggest drawback is that the app doesn’t go far enough to just go ahead and do the things you’ve asked it to do. Ask for it to send an SMS, and you still have to actually press send once your message is composed. Ask it to send a tweet, and it will compose it for you, but you still have to press update. This is even true in hands-free mode, where the process should be seamless. We’d also like to see closer integration with other apps. Vlingo can open any app you have installed if it recognises the name, but it can’t issue commands to that app. So while I can have it open Music, I can’t have it start playing a specific artist or playlist.

Google Voice Actions for Android (Free, built-in) comes pre-installed on your device, and while many Android faithful roll it out as a knee-jerk defence whenever someone mentions Siri, it’s not the same. It share a number of great features, is deeply integrated into Android, and also allows you to send SMS messages, emails, get driving directions, perform web searches, and voice dial your contacts, but that’s where it stops. There’s no integration with other apps, no plain language commands you can issue to it to have it update your social networks, find nearby Chinese food places, or check in to FourSquare for you. Still, for most people, it’s effective and covers the basics — it’s just that other apps can extend its functionality.

Jeanne (Free/$2.75 Pro version) has come a long way since it was confusedly also named “Voice Actions,” and it does a great job of responding in-voice to commands that other apps won’t. You can ask Jeanne for the weather in other cities, set alarms or start timers, search the web, or do anything that Google’s own Voice Actions can do, like send emails and SMS or voice dial your contacts. The trouble is that if you want additional features, be ready to lay down $2.75 — not much, especially considering the paid “Voice Actions Plus” promises to open your music app and play specific artists, launch your browser and go to specific sites, control bluetooth and Wi-Fi by voice, and answer questions via Wolfram Alpha, much like Siri does.

The trouble is that in our testing, all of those advanced features were hit or miss, and often varied based on the device you owned, making it tough to justify the money. Sometimes it would shut off Bluetooth; other times it acted as if it had but actually did nothing. Sometimes searches would time out, or the app would be confused if I moved it from portrait to landscape and stop whatever I just asked it to do. Jeanne has a lot of promise, it just needs some attention.

Speaktoit Assistant (Free) spends so much time trying to be a personal assistant on the surface — giving you different cartoonish personas you can customise and backgrounds you can tweak — that it fails in some of the more basic areas, and hasn’t grown much since the last time we looked at it (aside from offering some new voices.) You still have a tiny microphone button you have to press in order to interact with the app, no decent hands-free option to speak of, grammar errors all over the interface and text that quickly extends off screen instead of wrapping a line, and more. Yes, Speaktoit does a lot — you can have an idle conversations with your assistant, ask trivia questions, get driving directions, open apps, and search the web. However, you’ll find yourself searching the web when you want to open apps, and missing some features that even Google’s Voice Actions provide by default. If you don’t mind sacrificing some function for form and customisation, this is the app for you.

EVA ($9.99, 28 Day “Intern” trial version available) EVA, and its male-voiced counterpart EVAN do a lot of things right that make it worth a look. There’s a conversation history on-screen so you can see the commands you’ve issued, the app supports voice-operated home automation if you have an INSTEON system in your house (irrelevant for most people), supports location-based reminders and alerts so you remember to pick up the milk on the way home from work or to turn off the oven when you get in the car, and more. There’s a hands-free option much like Vlingo’s, which lets you speak out loud to the app without touching the screen first, and gives you quick access to your music library, navigation, weather, and custom shortcuts to apps or utilities on your phone. EVA won’t update your social networks, but she will open their apps for you. Eva’s real problem — like many Android assistants — is consistency. Sometimes the hands-free phrase would work, sometimes she would open the app I wanted and other times she’d open something else. Plus, the fact that EVA is missing some features available in other, free apps makes it really difficult to justify the huge price tag.

Iris (Free) is a joke. It was built as a gag to make fun of Siri and the very concept of “personal assistants,” and while it has grown a bit and added a number of search engines to its belt, it’s not very effective, and doesn’t consistently understand what you ask it. There’s nothing about it that’s better than even the built-in voice actions. Our sibling site Gizmodo broke a story about its questionable responses to specific questions yesterday, which left us mostly surprised that enough people actually use Iris seriously to warrant a deep dive, but apparently they do. Steer clear, there are better, more useful tools available — at least until Iris improves.

Lifehacker’s App Directory is a growing directory of recommendations for the best applications and tools across multiple platforms.