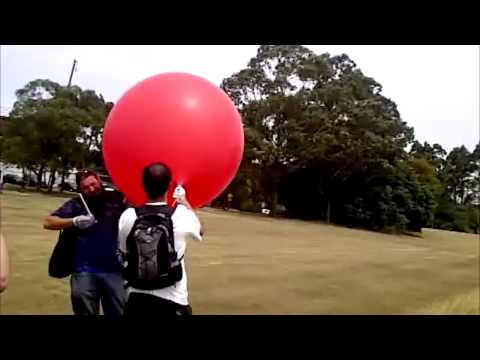 What’s better than launching a high-altitude balloon into space from Adelaide 20 times? Doing it live from Linux.conf.au in Ballarat. Check out our exclusive video and learn more about the Project Horus team after the jump, including their plans to launch an Internode Node Pony into space.

We first saw Project Horus at last year’s Linux conference, when they showed off Tux flying majestically above South Australia. This year there’s no penguin attached, but after a presentation about how the project works, a 100gm helium-powered balloon was launched live at Ballarat University, where the event is taking place. And it got moving pretty quickly, as you can see from the live online tracking — this screengrab was taken about 30 minutes after launch:

This is where it landed a couple of hours later:

Despite the technical and logistical complexities of launching a high-altitude balloon with its own tracking system and a camera attached, Project Horus is an entirely amateur effort, with around half-a-dozen core volunteers. “The main reason for us doing it is we find it fun,” founder Terry Baume explained. “It’s to test our skills and what we’re capable of.” It’s enough to make you want to go out and buy a balloon.

Some random technical facts about the project:

So what’s next? Baume says the team wants to run longer missions, with gear in the air for 24 hours or more. And work has already began on plans to launch one of Internode’s Node Pony mascots into the sky. Here’s hoping iiNet doesn’t decide to block that project.