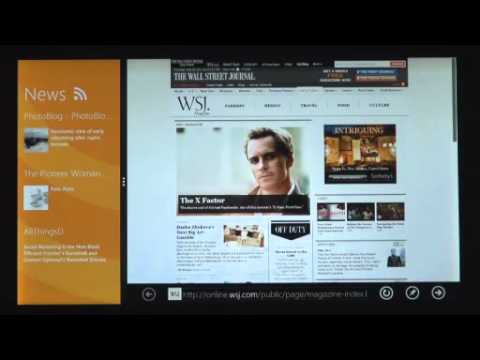 We’ve been excited about the upcoming Windows 8 for a long time, and today Microsoft demonstrated some of the very Windows Phone-like interface overhauls coming to both tablet and desktop computers.

The biggest change in Windows 8’s new interface is a start page that takes the place of the Start Menu, using the tile-based Metro UI that Windows Phone users have come to love. From there, you can quickly launch full-screen, HTML5-powered apps, switch between them, and even snap them to the sides of the screen for true, side-by-side touch screen multitasking.

Your desktop apps won’t be going away, of course. If you’re running Windows 8 on a desktop PC, you can head into the familiar Windows desktop and run your usual apps in windowed mode. It’s a bit unclear exactly how this will work, and this is a pretty early look at the OS, so things could change, too. But, as Microsoft’s Director of Program Management mentions in a video preview, you’ll be able to use Windows 8 across all machines, desktop, laptop, and tablet. Check out the video to see more, and hit the link to read more details about the upcoming version of Windows.