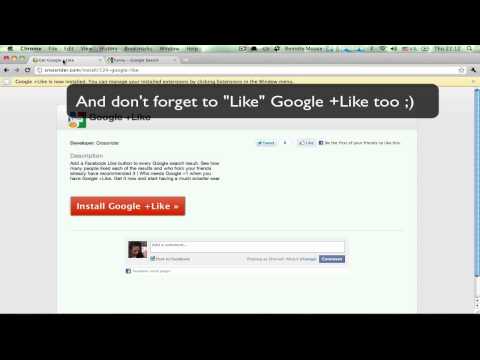 Chrome/Firefox/Internet Explorer: If you need a bit of help sifting through your Google search results, browser extension Google +Like will direct you toward the most popular pages by telling you which results have the most “Likes” on Facebook.

Google recently announced a new recommendation engine, called Google +1, that lets people mark which sites are good, useful or interesting from Google search results. It’s cool in theory, but as with most of Google’s new “social” features, the problem is it probably won’t get used a ton. Instead of using something that’s useful in theory, you can just install the Google +Like extension to replace it with something you already know everyone uses — the “Like” function on Facebook. It isn’t revolutionary, but is one more helpful way for you to filter through a sea of search result links to find what you’re looking for. Check out the video above to see it in action, or hit the link below to try it out.