How To Track, Recover Your Stolen Laptop Or Android With Prey 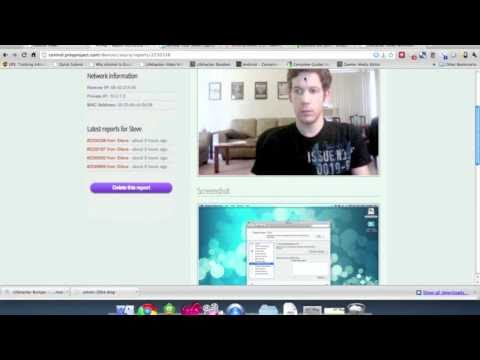 Laptops are lighter and more powerful than ever; they’re also easier to steal. Luckily, a genuinely versatile and powerful track-and-recover applications is also free. Here’s how Prey works, and how it could save you a month’s rent in new laptop cost.

There are obvious reasons to like Prey. Chief among them, it’s free to use for up to three devices of any kind, from computers running Windows, Mac or Linux to Android devices. But that wouldn’t mean anything if the tracking Prey provided wasn’t really solid.

We’ll tell you why in readable text, being a blog and all, but we think our video walkthrough, embedded above, tells the tale even better — with old-timey music, too, courtesy of Incompetech.

On a laptop with a webcam, a Wi-Fi chip and Prey installed, it’s a good bet you’ll have a photo of your thief and an approximate location on them just as soon as they have your computer running for a few minutes. You don’t have to actively search, either — devices with Prey installed in the background “phone home” to your web-based account every 20 minutes by default (you can decrease this interval), spilling their guts about everything they’re doing.

Webcam snaps, desktop screenshots, lists of modified files and running programs, network data galore and much more are provided to those who want to quietly track their, uh, prey. If you’d prefer to think that maybe someone just found your device, you can set read-aloud alerts, fire off alarms, change the system wallpaper, lock it with a password and remotely wipe out your browser data — all from any browser you can get to.

The basics of installing and using Prey are covered in the video, but here’s a brief run-through:

Step One: Set It and Forget It

Head to Prey’s download section, grab the package for your system (again, Prey supports Windows, Mac, Linux and Android), then install it as normal, creating an account as you do so. The only major issue to address is how you want to control your system and track it if it goes missing. Most people will want to stick with the default, web-based standard method, but those who would prefer an email-based, server-controlled tracking setup can explore an “Advanced” option. I’m focusing on the default Prey + Control Panel setup.

Because it’s tracking software that doesn’t want to be seen, Prey is almost invisible when it’s running on your system, without any configuration or executable files to be seen. In fact, once you’ve deleted the installer, you shouldn’t be able to find Prey at all in your system, because that’s the idea. It quietly and quickly checks in with Prey’s servers in the background, at an interval you decide, to see if the owner has logged in and marked it as stolen. That’s all it does — until you flip the switch on Prey’s servers to note that it is, in fact, stolen or ask for an update on the hardware profile.

After you’ve installed Prey and set your defaults, log into Prey’s web centre, and peek at the basic configuration tools. You can give each of your devices a unique name, clarify its details, and change the frequency of its reporting time. You can set the frequency to a reasonable 20 or 30 minutes now, but don’t worry — you can update it as soon as your device is swiped, so you won’t be wasting those precious early minutes wondering what’s up.

The Modules menu on Prey’s site determines what happens when your device checks in and notices that it’s stolen (if only computers could recognise their strange meta-existence). There are two types of modules: the quiet, informative “Report” modules, and the more aggressive “Action” modules that secure your data, and likely let the thief or finder know that you know your stuff is missing — and that you’ve got a way to track it.

Report Modules: In general, you’ll want to switch all these on. You never know what might come in handy, and it’s not too much more effort for Prey to grab any one item more than the others. You can set limits on how much raw modified data and running program information is thrown your way, but the defaults are fine, if voluminous. The most important module to turn on is Geo, which uses Google’s Wi-FI location API to try and triangulate a laptop’s location — or the GPS chip in an Android for very accurate positioning.

The main exception would be the “Webcam” option. If your laptop has a webcam that must activate a very distinct light or LED before snapping a picture, it could be an obvious give-away and tip your hand. MacBooks, for example, turn on a green LED when grabbing images from the webcam. If you wanted to go stealth and not let the unlawful owner know you had them, you could shut this off — but you’d likely be better off trying to grab at least one picture of the thief unawares. (He or she may not be perceptive or paranoid enough to catch what’s going on.)

Alarm modules: When subtle won’t work, Alarm Modules provide you with your next best chance of alerting the thief, the person who bought stolen goods from the thief, and potentially anyone near them, that your laptop is your laptop. Failing that, some alarm modules can at least wipe out any potentially revealing information about you.

Alarm, Alert, Change Wallpaper, and the password-protected Lock are pretty self-explanatory. Our volunteer “thief” Whitson reported that the alarm is, in fact, quite loud and attention-getting, and that the pop-up alert comes up over anything else you may be doing.

The “Secure” module is where you make your big security decisions. You can set Prey to wipe out your entire password keychain, delete data from Firefox, Safari or Chrome (sorry, Opera users), or wipe down Outlook or Thunderbird. A total account wipe-out would be a nice option, of course, but there’s likely a compromise between making Prey still active and having data deletion access.

So you’ve registered Prey on your laptops and Androids, and if it gets stolen, you’ll get an email announcing a new report is drawn up every X minutes. Now what?

First things first, report your laptop or device stolen to the police. The cynical may assume they don’t care or don’t have the know-how to track your gear, but the cynical often aren’t shielded members of a law enforcement agency. Give the police everything you have on your device, including serial numbers, identifying stickers or characteristics, and the last place you knew you had it. It never hurts. When using the similar “Find my iPhone” feature of the MobileMe service, police in Madison, Wisconsin, were able to track down two iPhones stolen from a store. Your mileage will vary, but it’s best to head through official channels first.

If you’re on your own, you can hope that the thief or other person toting your laptop makes a regular run of certain Wi-Fi spots. You’ll have the IP address they’re connecting outward from, the name and details of the Wi-Fi spot they’re connecting to, and a list of the programs they’re running, connections they’re making, and other details.

Your best hope is that geo-location through available Wi-Fi can point you somewhere unique in an uncrowded neighbourhood, or that the Wi-Fi they connect to is unique and identifiable — “JoesCoffee”, “246JonesSt”, or something similar would be ideal. If your webcam can grab a clear snap of the thief, all the better. If you’ve got nothing quite so unique and helpful, a visit to the traceroute and other tools at network-tools.com (or nearly any site resulting from a “traceroute” Google search) can potentially get you closer to your missing goods.

In any case, contact your local police rather than try and pin the phone down yourself. One blogger snatched back an iPhone with some help from friends, but he suggests your journey might not have such a funny ending.

Here’s hoping you never need to use Prey, but if you do, you’ll likely find it useful to at least secure your computer and force some second thoughts on a thief or owner.
Got a great idea on how to use Prey more productively, or get more useful information out of the data it shoots back? Share your tips and recovery strategies in the comments.