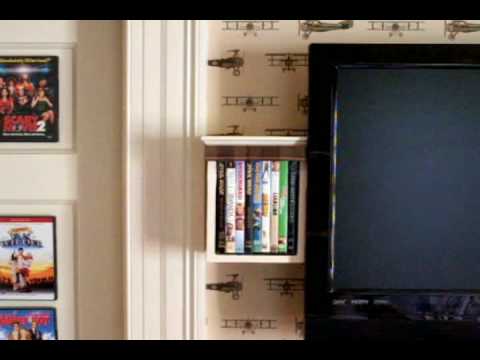 We love a good secret hiding place , and this clever hidden cabinet is no exception.

Why would you make a hidden compartment out of DVDs—something a thief isn’t unlikely to rifle through? The impetus for making it wasn’t primarily to hide things inside it, but rather:

My TV was mounted onto the wall using a bulky bracket. From the left and right sides of the TV, the brackets would show. I covered them up by making two smaller sized boxes to fit and block the bracket area. I just recently remodeled my room, so I thought it would be nice to do something a little more creative than a standard shelf. The hidden shelf looks like a stack of dvds, but is in fact a hidden door.

This secret door is also a fairly nice way to conceal electronics.

All you’ll need to pull of your own secret door is a mouse trap, glue, a few DVD cases you’re willing to sacrifice, and a few other various bits and pieces you can find at your local hardware store.