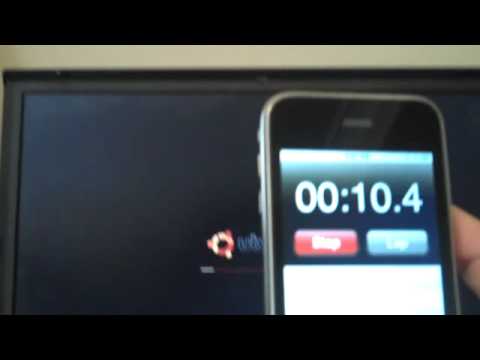 Google webspam wrangler Matt Cutts treated himself to a solid-state hard drive—the kind made from memory chips—and timed a customised boot of Ubuntu 9.04. It was up and running Firefox in about 18 seconds.

Start-up time was one of the main focus areas for the “Jaunty Jackalope” release, currently in beta and due for release April 23. Combined with a hard drive made from flash memory instead of spinning magnetic disks, Cutts found that, after removing his ThinkPad’s BIOS screen wait (I feel the pain there), his system launched into a net-connected Firefox in about 17.5 seconds. See for yourself:

Cutts also notes that by re-installing 9.04 with the speedier ext4 format, he shaved another second off his boot time. To automate his system’s boot-up and Firefox launch, he cut his GRUB boot loader time to 0 seconds, enabled automatic login in Ubuntu, and added Firefox to his startup programs. Cutts links to those steps, and explains more on his system, at the link below. Ubuntu 9.04 boots in 17.5 seconds! [Matt Cutts]